Nevada Space Grant and NASA EPSCoR has initiated a speaker series that will occur approximately every other month. This series will virtually bring NASA scientists and interns to Nevada to talk about the critical research they are performing to meet NASA’s missions. Stay tuned for upcoming announcements!

Todd Jackson, Jr. is an electronics engineer with the National Aeronautics and Space Administration (NASA) in Los Angeles County, CA where he serves as a Range Systems Engineer. Mr. Jackson’s interest in aviation started at an early age. A military brat, Mr. Jackson enjoyed watching aircraft pass by on the flight line near his father’s mechanics’ shop. He pursued a degree in Aerospace Engineering at the University of Arizona, graduating in 2008.

Mr. Jackson will talk about the path of his career, obstacles he overcame and address questions from students (and faculty) about STEM education and how to pursue your STEM career dreams. 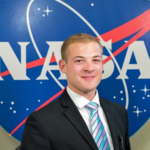 Jason Cornelius is a National Science Foundation Graduate Research Fellow and Doctoral Student in the Department of Aerospace Engineering at Penn State. Originally from the small town of Mountain Top, Pennsylvania, his current research supports the NASA Dragonfly mission that will launch a planetary aerial vehicle (space helicopter) to the surface of Saturn’s largest moon, Titan. Jason has previously worked with the Aeromechanics Office at NASA Ames, who contributed to the Ingenuity Mars Helicopter, the Flight Technology R&D and Mechanical Groups at Bell Helicopter and has also spent considerable amounts of time in both Russia and China. His future career plans involve supporting the continued manned and unmanned exploration of space and working to develop international teams to achieve these goals.

Planetary aerial vehicles (PAV) have long been proposed as an advanced means of exploration for various celestial bodies throughout the solar system. With the recent landing and highly successful deployment of the Mars Ingenuity Helicopter, more interest has been developing in potential future missions to support scientific exploration using these vehicles. The talk will cover the first helicopter to fly in space, Ingenuity, as well as the next PAV that is currently under development, Dragonfly.